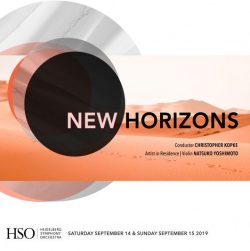 New Horizons reveals sounds of new worlds while drawing on colours of the past. HSO Artist in Residence, Natsuko Yoshimoto performs Stravinsky’s Violin Concerto, a work whose forms echo the Baroque era, while its themes are alive with a multitude of Stravinsky’s spectacular tricks. Michael Daugherty’s Radio City (2011) is a large-scale symphonic tribute to fiery conductor Toscanini. The score traces his move from celebrated director of the famous La Scala, to the brave new world of New York and the NBC Symphony Orchestra in the late 1930s. Explore the expansiveness and migration of musical ideas across time and place.