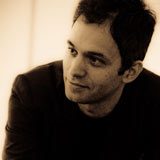 Identified by The Australian as ‘the best young talent for the new millennium’, pianist/composer Benjamin Martin has become known as an artist of exceptional versatility and subtlety of expression. A graduate of the Juilliard School, he has been described as ‘the consummate artist’ (The Age), and as a composer, ‘distinctive… arresting in style’ (New York Times).

Benjamin has received numerous awards including the Queen Elizabeth grant, first prize in the Hepzibah Menuhin Memorial Award, the Marten Bequest Scholarship and two scholarships to the Tanglewood Summer Festival (as pianist in 1987, and as compose in 1988), where he participated in classes with Leon Fleisher and Leonard Bernstein.

He has performed throughout Australia, and toured the United States, Europe and Asia, performing solo and duo-recitals with such artists as Alina Ibragimova, Pekka Kuusisto, Richard Tognetti, Dimitri Berlinsky, Janice Martin, Steven Davislim, Boris Baraz, Eiji Oue and the Utrecht Quartet. Benjamin has also given numerous World Premieres; as conductor of a work by Matthew Herskowitz in New York, the New York Premiere of Two Pianos by Morton Gould (associate artist M.Herskowitz) and Brett Dean’s Elegy (with cellist Emma-Jane Murphy).In 1993, John Browning gave the World Premiere of Martin’s Three Portrait Etudes at The Alice tully Hall, NY. His Brazil has been recorded by Matthew Herskowitz for the Canadian label Tout Crin.

Benjamin’s own music has also been performed in Europe and the United States, notably by Kristian Jarvi’s Absolute Ensemble, which toured Australia in 2002. In 2009 Martin toured the United States with outstanding New York jazz musicians Jason Di Matteo (bass) and Greg Gonzales (drums) performing improvisations plus Benjamin’s own music.Closer to home, Benjamin has featured as guest artist for most festivals and concert series in Australia including ten Huntington Festivals, Musica Viva, the Sydney Opera House Mostly Mozart Festival, the Melbourne Festival, the Sydney Festival and the Coriole Festival.

In 2009-2010 Benjamin gave a series of talks for 3MBS titled Beyond Measure, whereby he explored certain philosophical and social aspects throughout music’s history. In 2010, Clockface – a large work resulting from a collaboration between Benjamin and the painter-poet Matthew Hooper – received its premiere in the Sydney Chamber Music Festival, featuring Guy Noble as narrator. In September 2010, Benjamin became the new pianist of the Freshwater Trio.